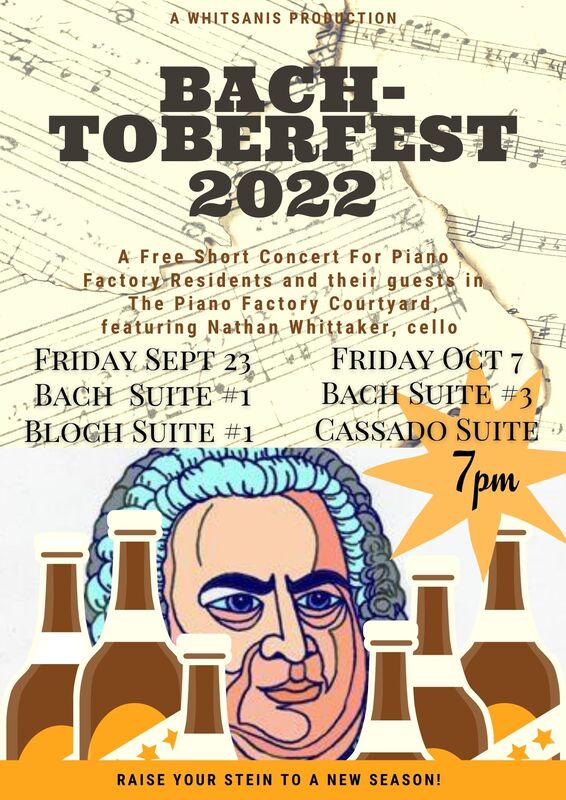 The Bach Cello Suites
The Cello Suites of Johann Sebastian Bach hold a rare status in our contemporary musical culture as they are nearly universally known and beloved, yet are also shrouded in mystery. They are a historical enigma - there are no other existent compositions for cello from that time that compare in musical or technical complexity. For the cellist, questions abound: what is the purpose of these pieces, for whom were they written, for what (if any) occasion are they intended, are they new musical concepts or do they tie into existing cellistic traditions? Some even wonder if these works were actually composed for the cello or if they were even composed by J.S. Bach at all! Making matters more complex, Bach’s original manuscript is lost to time, and cellists must rely on a series of problematic and contradictory copies made throughout the 18th century. The answers to these seemingly basic questions remain frustratingly illusive, yet the quality and inventiveness of Bach’s composition have catapulted the Cello Suites through history into the pantheon of Baroque masterworks.


There are many things, however, we do know for certain that make these pieces fascinating to study and perform. They were composed around 1720, roughly at the same time as the unaccompanied works for violin and the Well-Tempered Clavier. As (to our current understanding) there are no comparable works for unaccompanied cello it is clear he leaned on these other works for both inspiration as well as technical and practical guidance. A connection with the WTC is found immediately, as the G Major Prelude and the Prelude #1 from the WTC share the same chord progression. Bach also utilizes a keyboard form, the Dance Suite, as his organizational basis. The Dance Suite, first codified by the German organist Johann Froberger in the mid-17th century, is essentially a collection of French Dances organized in the order of Allemande, Courante, Sarabande, and Gigue. By Bach’s generation, it was typical to begin each suite with an extended Prelude and insert popular dances of the day called galanteries, most typically minuets, bourreés, and gavottes. Bach’s Cello Suites now serve as a textbook example of a dance suite, save for the extraordinary fact that he replaced an entire keyboard with only a cello.


Bach solved the fundamental problem of composing for the unaccompanied cello, namely creating functional harmony, by looking to the music for unaccompanied violin as well as the lute tradition. While the cello is capable of playing multiple pitches simultaneously, it is not a sustainable technique. Instead Bach employs Stile Brisé, or Broken Style, where the harmony is not presented simultaneously as on a keyboard, but it is spread over time. The magic of this technique takes place in the mind of the listener, where they piece together the broken harmonic parts and reassemble them to create functional harmony. In this way, the Cello Suites are a symbiotic partnership between performer and audience - both are necessary in the creation of this music.


Certainly Bach was a musical genius, but also a pragmatist - his works were composed for a purpose, whether as church service music, educational pieces, or as an audition for a better job. He famously composed a new cantata each Sunday over a several year period for his job. In that light, his Suites pose a fascinating question: What practical tradition do they tie into? One plausible theory is that he was tying into a tradition of cello chordal accompaniment - that is the creation of harmony on only a cello - an aural tradition that has been somewhat lost during subsequent generations. If so, these pieces serve as a “time capsule” into this musical practice, making the Suites archeologically as well as artistically significant. Another possible purpose for the Cello Suites were as teaching pieces, in fact their first publication in 1824 utilize the title “Etudes”. While at first this seems disparaging, Bach was an avid pedagogue, and reveled in the advancement of instrumental technique - the Cello Suites would fit this tendency. To this day, they remain some of the most challenging and instructive pieces for the cello. Later composers, particularly in the 20th century, were certainly tutored by Bach’s compositions, most notably seen in the works of Reger, Bloch, and Britten.


For as complex, rich, and enigmatic as they are, the Cello Suites of J.S. Bach have survived for 300 years for a simple reason - they continue to speak to us. In times of joy and triumph, or in despair and anguish, they can heighten revelry or soothe melancholy. Great art has always had the ability to inspire, comfort, intrigue, and answer the burning questions of what it means to be alive during tumultuous times, and what it means to be human. I personally owe a great debt to the Bach Cello Suites, as they have provided nourishment and been my constant companion, and in no small part have made me who I am today.

The Bloch Cello Suites
Ernest Bloch has been casually known in musical circles as that “Jewish-American composer”, which is true, but like most labels is patronizing and incomplete. Bloch was born in Geneva Switzerland in 1880 and studied violin with the celebrated Eugène Ysaÿe in Brussels. He moved to the United States in 1916, becoming an American citizen in 1924. His initial stop in America was as the first professor of composition at New York City’s Mannes College of Music, a post which he held until 1920 when he moved to Cleveland as the Musical Director of the newly formed Cleveland Institute of Music. Clearly Cleveland was hardly as inspiring as NYC, as he soon left and moved to San Francisco to work at the San Francisco Conservatory. When they ran low on funding in 1930, he went back to Switzerland in 1930 only to return (for sadly obvious reasons) to California in 1939. He retired to the Oregon Coast (perhaps the most beautiful spot in the world) where he composed his Cello Suites prior to his death in 1959.


Musical societies’ “pin holing” of Bloch’s compositions as “Jewish” rests in the late 19th century tradition of incorporating folk tunes and styles into composition. The trend is most associated with Bela Bartok who would take the (newly invented) wax cylinder recorder into the countryside to record, document, utilize, and popularize unfamiliar folk melodies. Bloch did much the same in his compositions by utilizing melodies of the Hebrew tradition - which were foreign to many of his musical contemporaries. Of course, the scourge of anti-semitism in European society controlled the narrative around his compositions and downgraded his compositions as “Jewish Music” instead of what it really is - great music, period.


Bloch’s affinity for the cello, and cellists’ affinity for him, is obvious in his music. Perhaps his most famous composition, Schelomo, is a tone poem for cello and orchestra where the cello takes the voice of King Solomon. His cello suites were inspired by and written for the cellist Zara Nelsova, whom Bloch exclaimed after hearing her play she was a “child of God!”. The Cello Suites, as a late work, rely less on Hebrew melodies, instead working off of Neo-baroque forms and techniques, ones pioneered and perfected by J.S. Bach. It is modeled on a Sonata di Chiesa, where the four movements are slow - fast - slow - fast. The first Suite begins in an improvisatory character, as if the music is forming from a nebulous cloud of nothingness, only to explode into the virtuosity of the second movement. The third movement, Canzona, does present a haunting Hebrew melody that is continuously reimagined and reinvented before the triumphant arrival in the final movement. The Suite, in my opinion, evokes the beautiful process of “becoming” - starting from nothingness, traveling through the crucible, yet guided and protected by wisdom and past spirits, until the unambiguous final ascension of arrival.

The Cassado Suite For Solo Cello

Gaspar Cassadó was one of the foremost cellists of the 20th Century. A musician of great versatility, he appeared regularly as a soloist with the world’s finest conductors and orchestras; performed chamber music with the most renowned musicians of the day; and produced a sizeable body of charming, well-crafted compositions and arrangements designed to showcase his own considerable talents as a cellist. His performance style and compositional oeuvre are often likened to those of the violinist Fritz Kreisler, who also wrote and performed his own concertos, showpieces, and charming recital encores that display the performer’s wit, agility, and lighter side.


Born in Barcelona in 1897, Cassadó progressed quickly in his musical studies. In 1906 the emerging 21-year-old cellist Pablo Casals attended a performance by the nine-year-old prodigy and was so impressed that he invited him to become his first fulltime student. Cassadó eventually attained a scholarship from the city of Barcelona to move to Paris, where he studied for many years with Casals. Cassadó considered Casals to be his greatest musical influence and his “spiritual father.”


While in Paris, Cassadó also pursued his studies in composition, working closely with such masters as Manuel de Falla and Maurice Ravel. Their stylistic influence can be heard in Cassadó’s 1926 Suite for Solo Cello, which was inspired by Casals’ legendary performances of the Bach cello suites. Up until the early 20th Century, Bach’s six cello suites were not widely known to the listening public; they were regarded as cello teaching material not quite suitable for general consumption. Casals radically altered that perception, performing them often and serving as their staunch advocate. His performances served as a catalyst for a vast outpouring of 20th Century solo cello works by major composers as diverse as Zoltán Kodály, Max Reger, Paul Hindemith, Benjamin Britten, George Crumb, and Gaspar Cassadó.


Cassadó’s Suite for Solo Cello combines the Baroque formalism and dance orientation of Bach’s suites with his own native Spanish flair. The first movement begins, á la Bach, with a free preludium that evolves into a zarabanda, a dignified Spanish dance related to the Baroque sarabande. The movement quotes Zoltán Kodaly’s Sonata for Cello Solo and, reflecting Cassadó’s studies with Ravel, makes extensive use of the motive that begins the famous flute solo from the ballet Daphnis et Chloe.


The second movement is written in the form of a two-part sardana. Beginning with a characteristicly slow, introductory section (in classic saradanas the first tirada was danced with the arms down), the music soon breaks into an animatedly rustic dance in 2/4 (the second tirada was usually danced with the arms up). The jauntily rhythmic flavor of the movement makes this the most overtly “danceable” of the three.


Cassadó continues to honor antique Spanish folkdance styles by basing the final movement largely on the jota, a dance originally performed in colorful costumes and accompanied by castanets. The movement begins slowly with a ruminative intermezzo featuring lyrical, five-beat phrases. The intermezzo gradually gives way to the more vigorous, swinging jota. The movement alternates between the introspection of the intermezzo and the extroverted, flamenco-like jota, bringing the suite to a lively, Spanish-style conclusion.